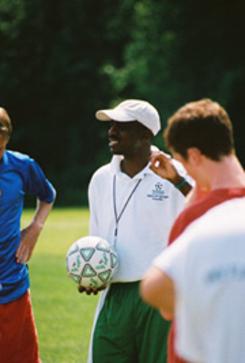 Nathaniel attended and played for Saint Finbar’rs College secondary school. He was a captain for his high school and was then  selected into the first Junior National Team. After playing with the Junior Eagles he was called up to play for the Green Eagles National Team  along with  the former coach of the Nigerian Super Eagles Late  Stephen Keshi,  and Former Nigerian National Team Captain Henry Nwosu.(MON)

Nathaniel Ogedegbe was recruited from Nigeria to join the men’s soccer program in 1981. While at Alabama A&M he received several personal recognitions and was a key contributor to the team’s success and was inducted into the Alabama Hall of Fame in 2013. Nathaniel was captain for two years. The men’s team was second place in NCAA Division I in the fall of 1981. In 1983-1984 the men’s soccer team was ranked #1 in the nation with an 18-1 record going into the playoffs where they lost to Clemson University.

Flawless Soccer is a part time pursuit for  Nathaniel who is a civil engineer who has in both the private and public sectors.  He currently works for the Town of Leesburg where his primary focus is on stormwater management and water quality.

developing your love of the game since 1993